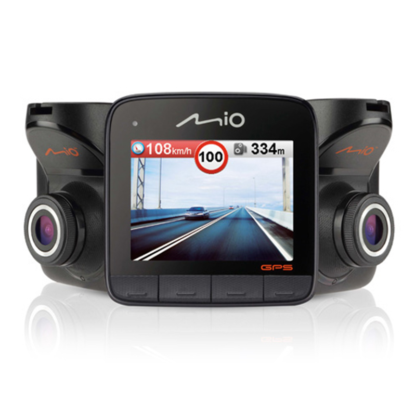 The MiVue 538 Deluxe is a feature rich dash camera. As the name suggests this is the deluxe version of the range so as well as the 1080p HD camera. You also benefit from speed camera alerts and a lifetime of free updates. This is a great option for those who would prefer a dash camera with a screen. See Full Product Description

The Mio MiVue 538 Deluxe is a feature rich dash camera. As the name suggests this is the deluxe version of the range so as well as the 1080p HD camera. You also benefit from speed camera alerts and a lifetime of free updates. This is a great option for those who would prefer a dash camera with a screen.Mio’s speed camera alerts really makes this dash cam stand out from the crowd. There is no monthly subscription and as previously mentioned a lifetime of free updates are available, as you approach a speed camera an alarm will sound to warn you. Another neat feature is the ability to be able to add new speed camera locations on the fly, with a touch of a button.

The Mio MiVue 538 Deluxe dash camera also has built in GPS to allow you to track and review your journeys using Google Maps. This could be crucial if you ever need to use your footage in an insurance claim.

Once the Mio MiVue 538 Deluxe dash camera has been powered on it will automatically start recording, there is no need to start the camera manually on each journey. The MiVue 538 Deluxe dash camera will record continuously until the designated disk space has been filled. It will then begin to overwrite itself. But fear not, the built in G-Sensor will automatically detect impacts and/or sudden braking. Saving segments of footage so you can review them at a later date.

We would always recommend that you have the Mio MiVue 538 Deluxe dash camera fitted to a permanently live power source, this will ensure that the parking mode will continue to protect your vehicle even when you are away from it. In most cars once the ignition has been switched off the 12v cigar socket ceases to provide power.

This camera comes with a free 8GB Micro SD Card. The Mio MiVue 538 Deluxe comes with the same 360° mount as the other cameras in the Mio range allowing you to set the ideal recording position. Featuring a F1.8 lens and 6 glass elements that let in more light than plastic devices. The Mio MiVue 538 deluxe captures video with sharper images and vivid colour, at day and night time. The Mio MiVue 538 Deluxe comes with safety camera data for the lifetime of your device, so you’ll always know where to drive extra carefully. One of our favourite features is the ability to be able to tap a button to add a new or mobile safety camera location. Record critical moments automatically with Event Recording Mode. When the 3-axis G-Sensor detects an event or sudden change in motion the Mio MiVue 538 Deluxe instantly saves the footage to a protected section of memory for future analysis. The Mio MiVue 538 Deluxe starts recording when you turn the key to start your car. You can even choose to have the device always on recording, which is possible in vehicles with constant power supplies. When the Mio MiVue 538 Deluxe is has a permanent live feed it will operate even with the ignition off. This allows the camera to switch to parking mode, collecting evidence when you’re away from the vehicle. With the latest motion detection technology the Mio MiVue 538 Deluxe will automatically activate and save crucial footage for later analysis. Track your position wherever you go. The built-in highly sensitive GPS receiver automatically records your driving information including speed, altitude, longitude, latitude & heading. Display the location on Google Maps™ when you playback the video.