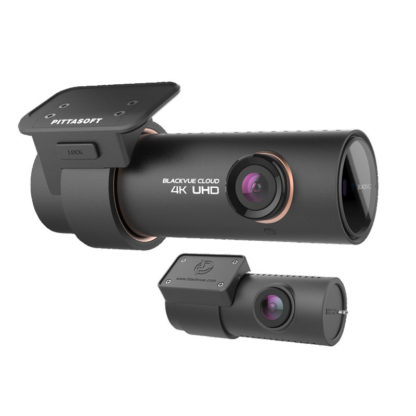 The BlackVue DR900S-2CH boasts 4K UHD recording on the front camera and 1080P full HD at the rear, providing the highest quality video possible. Along with high quality recording, the DR900S is compatible with BlackVue ‘Over the Cloud’, a service that allows you remote video access and vehicle tracking.

The BlackVue DR900S-2CH front camera has an 8MP Sony CMOS sensor allowing for resulting in 4K (3840×2160) @ 30FPS video recording, the rear camera records in 1080P full HD @ 30FPS. This places the D900S at the top end of the pile for image quality among dash cameras. Due to the improved image sensors, the BlackVue DR900S records crystal clear images during both day and night providing court admissible evidence of any incident.

You might be thinking that unless you have a 4K monitor, what’s the advantage? Well even on a standard monitor as the one you are likely using now. The zoom as shown in the video below is extremely effective.

The BlackVue D900S has four different recording modes and automatically switches between them based on what is happening.

Parking– When the camera has not detected movement over a 5 minute period it will go into parking mode, only saving videos if an impact or movement is detected.

Event– When a significant change is detected by the cameras G-Sensor a 60 second video file will be created.

Manual– If you see an incident such as road rage, dangerous driving or an accident not involving your vehicle you can manually create an event file by using the proximity sensor on the end of the camera. This will then mark the video file as an event allowing you to easily find the footage later. 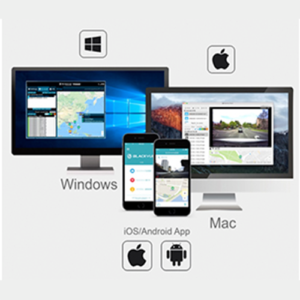 GPS– When there is a GPS signal, the vehicles location and speed data will be recorded, with the option to have your vehicles speed data overlaid on the video footage. When reviewing footage on the desktop viewing software you are able to track your vehicles journey accurately with a google map.

BlackVue Over the Cloud

When using BlackVue’s Over the Cloud service you can remotely connect to your camera allowing you to live view footage, backup video files, access real-time tracking information and receive emergency notifications, all from your mobile or tablet. 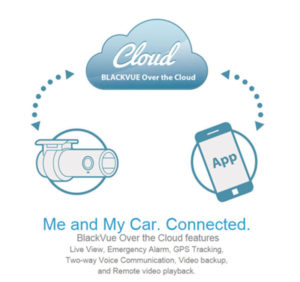 Video back-up– Securely store your important video files by backing them up to the cloud, ensuring the files you need are available to access easily when required.

Mobile Notifications– When you have paired your mobile device with the camera you will receive a notification if the camera detects an event.

Two-way voice communication– You are able to have a conversation with someone through the dash cameras in built microphone and speaker.

The items below come in every box, along with a users guide and warranty card: