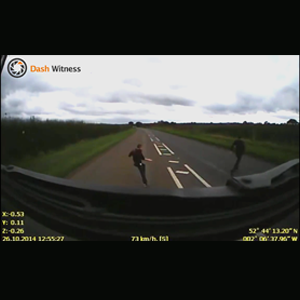 This teen is lucky to be alive after losing a game of chicken with a 40-ton truck. The collision happened on a country road on the A449 near Penkridge in Staffordshire.

Three young lads can be seen waiting on the verge, as the truck approaches one of them dashes across the road to be followed closely by his companion. The second teen mistimes his run and can be seen changing direction in a futile attempt to out run the truck, which by this point is already braking hard in a desperate attempt to avoid the youth.

A dashboard camera captures the moment the truck hits the teen. The teen can be seen disappearing out of view and then reappears, rolling several times before standing up and limping off. Amazingly the 14 year old was taken to hospital with only minor injuries to his hand and knee.

Police viewed the footage and no action was taken against the driver of the HGV. If a dash camera hadn’t of been fitted and the young lads in question were too scared or dishonest to admit the extent of their actions, it would have been the drivers word against theirs.

The outcome could of been very different, the driver who was already distressed at the situation would of had the increased worry of being deemed to be in the wrong. The company of said driver would of had to mitigate against bad press and the overall cost for investigating and possible court proceedings could of been huge.